This is where the Martians live of course.
I have always been fascinated by Mars and have enjoyed reading about how our view of Mars has changed over the last hundred years. When I was a child it was just a small red ball, half the size of the Earth, with what looked like ice caps on the poles made of water or dry ice which expanded and contracted with the seasons and the surface covered in strange ever-changing markings.

Like many children I painstakingly made drawings of the ‘canali’ of Mars, first described by the Italian astronomer Giovanni Schiaparelli in 1877, which everyone knows was apparently mistranslated into English as “canals” and put a lot of SF writers on the gravy train.
Despite the paucity of data, there was much discussion on whether Mars was habitable with the general conclusion that Mars was a barren place, could not support life, and

devoid of water and the marking were just the effect of erosion caused by the Martian winds.
Personally I always thought the redness of Mars was due to rust formed by the reaction of iron, water and air and this suggested that the Mars once had oxygen and there had been vast quantities of water at or near the surface. Which just goes to show how easy it is to form an opinion on a matter with no credible knowledge or evidence of the subject what so ever.
However, when Mariner 4 went to Mars in the 1960’s its analysis seemed to confirm the majority opinion that the place was quite uninhabitable for the likes of us. With a surface pressure of only a few thousandths of earth’s our bodily fluids would rapidly boil when they were not being frozen by temperatures down to -100C.
There was one optimistic note for life though which I clung on to. The temperature at the equator could rise up 20C.
All this gloom, I was glad to see, was transformed by Mars Orbiter and the NASA’s Mars Global Surveyor amazing maps of Mars and the surface analysis carried out by Spirit and Opportunity which gave conclusive evidence that vast quantities of liquid water existed at some time in the past and was still present at or near the surface.
To get an idea of what the topology and geology of Mars looks like go to the Google’s Map of Mars and Wikipedia’s Geology of Mars

For my novels on Mars I have selected the northern area around the Tharis Volcanoes and the Mariner Valley as my main locations. I was particularly fascinated by the Tharis volcanoes by their almost artificial looking alignment and the massive Mons Olympus, the tallest volcano in the solar system, rising behind it.
I postulated that the northern hemisphere, most of which is a smooth depression, was once the Martian Sea and the Mariner Valley was a great river fed from underground lakes in the region of the Tharis and Olympus volcanoes which flowed down to the bay of the Chryse Planitia. This apparently wasn’t too far from the truth as results from the Global Survey suggest that the immense equatorial Mariner Valley, almost 4000 km long, was actually formed by a catastrophic release of underground water!
To meet the Martians in my novels I had to find a way to get under the surface of Mars. I thought of entering via the volcano summits or imagined caves in the cliffs of the valleys. But then I found that NASA’s Odyssey spacecraft had spotted seven almost perfectly circular pits or cave on the flanks of the Tharis Arsia Mons volcanos. 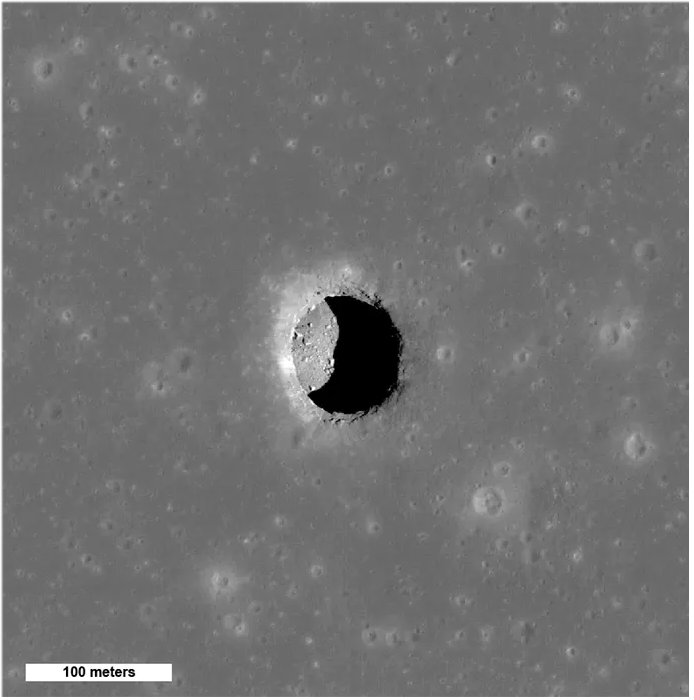 The entrances to these pits were 100 to 250 metres wide and were thought to be up to 100 metres deep. My view is that we will eventually find a vast cavern network beneath them left by the massive lakes of water that erupted and flowed across the plain to form the Mariner valley complex. The holes I think are just puncture marks in the cavern roofs caused by meteorites.
Anyway these gave me a ‘credible’ entrances into the Martian world I was looking for. I would not be surprised if whatever form the Martians might exist this is where we will find them.

A description of what they look like can be found here.